The 5 Principles Of How to Win Friends and Poison People
..Or The art of getting started when you have next to nothing.

I have just made chocolate cupcakes, but…

I have also just started renting a small cottage in Rural
Portugal. None of our boxes have arrived from the UK yet, and so I have limited
resource.

I had a recipe, (even if I did not quite
understand it all as it was in Portuguese), but no measuring tools, no cake tin
and an oven I have not used before. But I decided I was going to do this thing.

I bought ingredients for the cake, paper cups, and some
cooking chocolate. 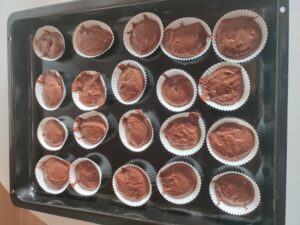 I guesstimated the amount of water, simply adding a bit at a
time till it looked right.

Here they are just before popping into the oven.

I had to improvise on the chocolate topping as it was first
too thick and would not melt fully, so I added milk. Then it became too runny,
so I grated more chocolate in and added some sugar. Eventually I decided it
just had to pour and hope for the best.

The end result was just about OK…. The topping became more
fudge like that I was hopping for, but passable.

So, even though I had little to start with other than my determination
to make some cakes, and although this first attempt is not perfect, I am happy
with the results.

The idea of this cake baking was to say thank you to our new
neighbours in the small village we have moved to for the eggs from their
chickens that they gave us.

I only hope the cakes don’t poison them.
BUT….. you just can’t win in the ‘being nice’ game if you
are up against the rural Portuguese….. The plastic cake container was returned
minutes later filled with their own olives in a beautiful garlic mix.

So what has all this to do with Online Marketing?

1: Decide you are going to do this thing.

2: Start, even if you don’t have everything just right

3: Doing something is better than doing nothing, so don’t wait
for perfection.

5: You may well be surprised at the results it generates.

If you have been thinking about starting an online business,
but not sure what to do first, or you don’t think you have the right tools in
place to get started, and you would like some help, drop me a line and we can
chat. [email protected]